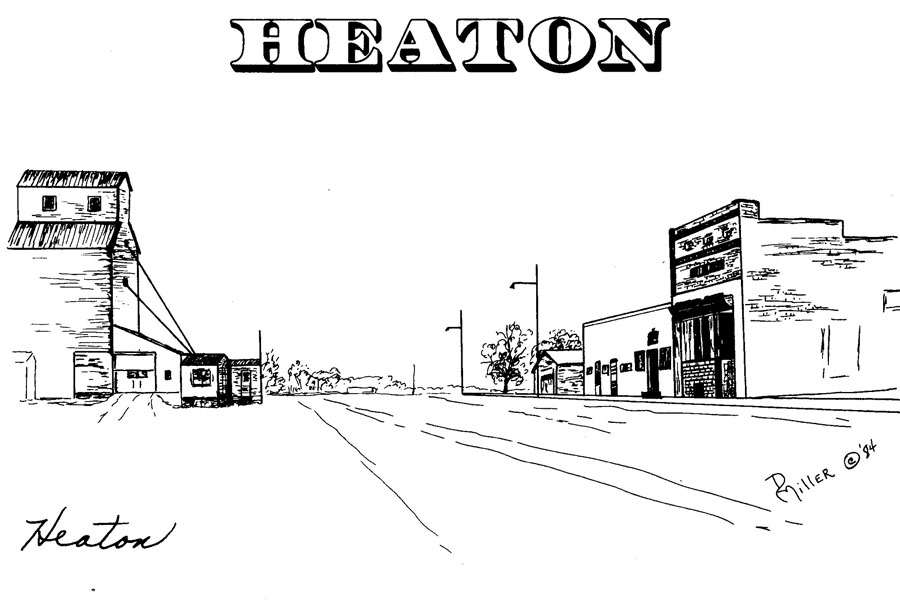 Heaton was platted in 1895, the first business in town was a feed mill opened by pioneer settler Walter W. Lee, as soon as town was platted. First store opened by Louis Falk in 1903 and the Post Office established in his building July 27, 1903. First bank was the Farmer’s State Bank, still in existence in 1976. (by E.S. Killie, as printed in the May 27, 1976 edition of the Wells County Free Press)

In 1913, the Bismarck Tribune sponsored a ride by the “Overlanders,” a dozen horsemen, to many towns and promoted the sale of the Tribune.  The following excerpts taken from an article about Heaton, titled, “Opportunity is Knocking at the Door,” by C.R. Neher.

Opportunity knocks at every door once at least, and that is what is happening at the door of Heaton, the City of Opportunity. This town is located in Wells County, just twenty miles west of Carrington. You will have to journey days to find a more promising town than Heaton is today. The business men are the kind that believe in making not breaking, and to that end have confined their energy. They are up-to-date in every respect, having one of the finest ball teams in this part of the state, having played some seven games at the time the Overlanders were in Heaton and losing but one, and we came to the conclusion that the umpire had something to do with that. Of course, the umpire is the most disliked man in the game today and always will be.

The drug store in Heaton supports would do credit to any city of ten times the population of this busy town. The establishment was opened to the public three years ago [1910] and has found everything that a drug concern would want to make it profitable. The proprietor, Mr. J.F. Hambleton, will tell you that Heaton has anything skinned on the map and is willing to back it up with the yearly sales. You will find one of Heaton’s big boosters in Mr. Hambleton.

The Farmers State Bank was organized in 1907. The bank is a follower of the strictest banking rules and a safe place to deposit your earnings. You will find this bank the place to put your rainy day dollars and know that if sickness or the hundred and one things that daily stare us in the face happens, we are safe from the financial side of worry. The officers of this bank are as follows: G.P. Turner, president; L.C. Turner, vice president and C.I. Turner, cashier. Capital $10,000.

The Heaton State Bank is one of the soundest institutions of its kind in this territory. The gentlemen are all the at the word may imply and you will receive the proper consideration that any first class establishment oft his kind will extend to its patrons. The officers are: C.L. Atkinson and A.E. Anderson. Capital $19,000; Loans $27,000; deposits $28,000.

The three elevator companies located in Heaton made some kind of a stab at the high mark when it comes to buying grain for the season of 1912. Think of the three taking care of four hundred and twenty-five thousand bushels of grain! That is getting pretty clos to the half million mark, and it would not surprise us if they went over that point this year. Leave it to the farmer where he wants to take his grain and do his grading and you will find that he knows the best places.” (“Wells County 1884-1984 A Centennial Souvenir.”)