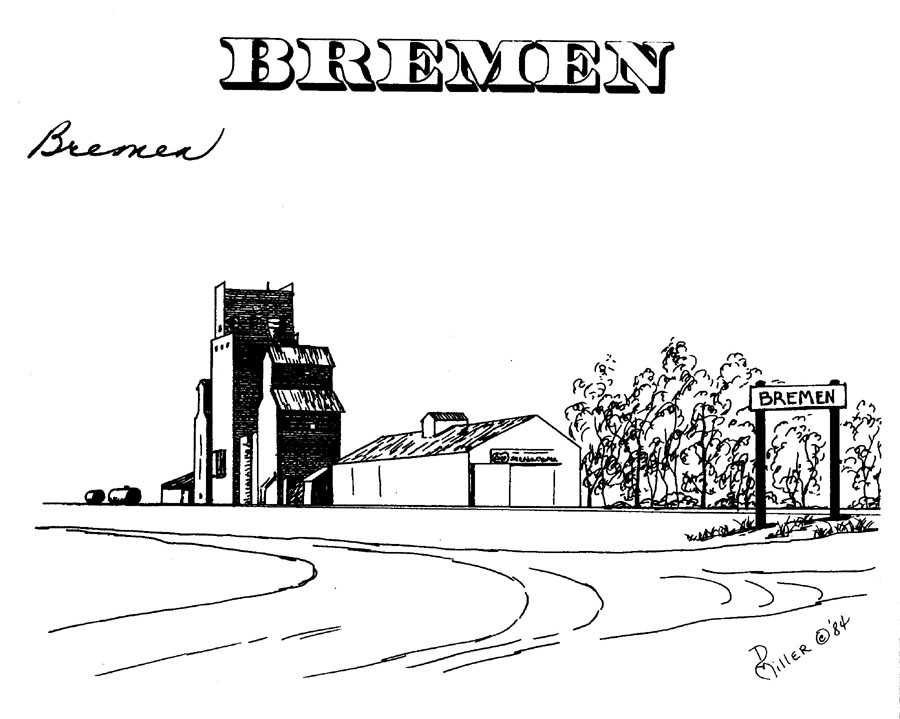 At the present time, Bremen has two active business:

The Bremen Bar is owned by Kenny Risovi from Hamberg.  It is open 7 days a week, serves pizza, sandwiches and beverages, and has started a dart league that plays on Tuesdays. Their phone number is 701-947-5594

The first school in the township of Bremen was organized on May 16, 1891. The officers were Mike Lies, Jacob Allmers, Nick Broder, and Anton Lill

Bremen was the First of the “boom” towns on the new Surrey Cut-off of the G.N.R.R. Bremen dreamed of becoming the division point. The Bremen State Bank was chartered in Dec. 1909, and built before the rails came, as were several other businesses. First passenger train through Bremen over the new line was August 1, 1912. By then the town was a well-established business center. Post Office established in May 1910. Some of the early businesses were: Johnson Bros., general store; O.P. Olson, store; Equity Elevator; St. Anthony and Dakota Elevator Co. elevators. (by E.S. Killie, as printed in the May 27, 1976 edition of the Wells County Free Press)

From “The Greatest Event in Bremen,” by E.S. Killie
“The greatest event in the town of Bremen was the laying of steel into our town on Wednesday, July 19, by the Great Northern. There was a large gathering of people welcoming the long-looked-for rails.” This was what the Bremen correspondent wrote for the “Wells County Free Press” in 1912. After laying the main track past the depot site, the crew went back and laid a half mile of side track and moved all their boarding cars there for the two crews. “This makes quite an addition to our population,” he commented.
Activity at Bremen was at its peak during the month of August, 1912. With one steam shovel at work and another getting ready for operation, 7 to 10 trains coming and going, three large crews working at the gravel pit, about 400 men raising track, another crew working on the elevator (St. Anthony & Dakota), we have enough to keep us busy taking it all in,” wrote the Bremen Correspondent. (“Wells County 1884-1984 A Centennial Souvenir”)